Color Pair Art of the Day Orange and Blue 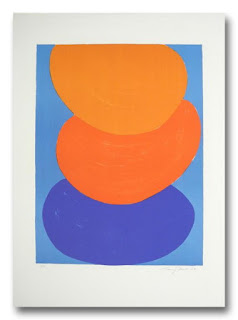 Wiki notes edited:
Sir Terence Ernest Manitou Frost RA (1915-2003) was a British abstract artist, who worked in Newlyn, Cornwall. He was renowned for his use of the Cornish light, color and shape to start a new art movement in England. He became a leading exponent of abstract art and a recognized figure of the British art establishment. At the Barbara Schaeffer Society in New York, 1960 he had his first US exhibition. There he met many of American abstract expressionists, including Marc Rothko who, along with his wife Mel, became great friends. The success contributed to an award of the John Moore Prize for 1965. In 1992 he was elected a Royal Academician and he was knighted in 1998. A retrospective of his work was held in 2000. 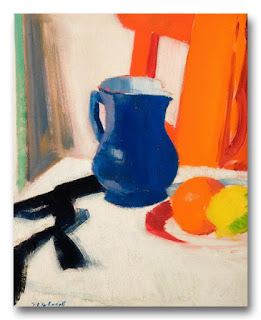 Wiki notes edited:
Francis Campbell Boileau Cadell, RSA, was a Scottish Colorist painter, renowned for his depictions of the elegant New Town interiors of his native Edinburgh, and for his work on Iona. He was a left-handed painter.

While a student, the President of the Royal Scottish Academy tried to stop him painting with his left hand because: "No artist ever became great who did so." Cadell swiftly replied, "Sir, and did not the great Michelangelo paint with his left hand?" The President did not respond and left the room quickly. A fellow student asked Cadell how he had known that Michelangelo was left-handed. Cadell confessed, "I didn't know but nor did the president."

Cadell spent much of his adult life in Scotland and had little direct contact with many of the new ideas that were being developed abroad. So he tended to use subjects and environments that were close at hand, landscapes, fashionable Edinburgh New Town house interiors, still life and figures in both oil and watercolor. He is particularly noted for his portraits of glamorous women whom he painted in a loose, impressionistic manner, depicting his subject with vibrant waves of color. He enjoyed the landscape of Iona enormously, which he first visited in 1912 and features prominently in his work. From October 2011 - March 2012 the Scottish National Gallery of Modern Art held a major solo retrospective of Cadell's work, the first since that held at the National Gallery of Scotland in 1942. 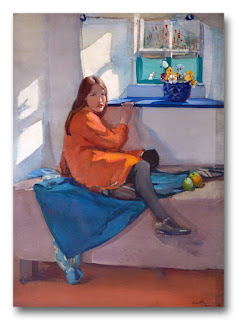 Wiki notes edited:
Dorothy Johnstone painted landscapes and portraits, particularly of children, and her style was free and relaxed, whether using oil, watercolor, pencil or chalk. Some of her work is displayed at the National Gallery of Scotland.

Johnstone was born in Edinburgh in 1892. Her father, landscape artist George Whitton Johnstone RSA (1849–1901), encouraged her artistic talents, and at the age of 16 she enrolled as a student at the Edinburgh College of Art. She took Life Class where she revealed her talents at informal portraiture, a genre for which she became well known. In 1914 she became a member of staff at the Edinburgh College of Art. From the summer of 1915, she became a regular annual visitor to Kirkcudbright in Galloway, where she would paint with other female artists including Jessie M. King as part of the Kirkcudbright School.

Dorothy, with her close friends Cecile Walton and Mary Newbery, was a member of The Edinburgh School, which reformed in 1919, a collective of gifted and progressive artists associated with the Edinburgh College of Art. During 1919 she was living in Kirkcudbright where she had an affair with Vera Holme, who would go on to be the Pankhursts chauffeur.

In 1924, at the peak of her artistic career, Johnstone mounted a joint exhibition in Edinburgh with fellow artist Cecile Walton. She married her colleague and fellow group member David Macbeth Sutherland that year. They had a son, Sir Iain Sutherland, in 1925, and a daughter in 1928. As a consequence of her husband's appointment in 1933 as head of Gray's School of Art in Aberdeen, now Robert Gordon's University, and of the marriage bar in place at the time, she gave up her career and her students.

She kept her links with Edinburgh by continuing to exhibit her portraits and landscapes at the Royal Scottish Academy, to which she was elected an Associate (ARSA) in 1962. 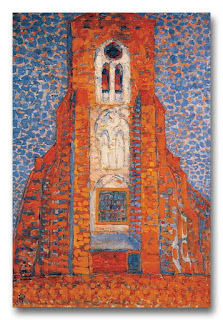 Tate notes:
Following the precepts of traditional color theory (based on the segmented color wheel divided into primary, secondary and tertiary colors), Mondrian used the complementary colors orange and blue to remarkably vivid effect. Each color is allowed to dominate a major area of the painting (the church and the sky respectively) but is also repeated within the area of the other.

As Mondrian himself wrote in a letter to the Dutch review De Controleur in 1909, "I believe that in our period it is definitely necessary that, as far as possible, the paint is applied in pure colors set next to each other in a pointillist or diffuse manner. This is stated strongly, and yet it relates to the thought which is the basis of meaningful expression in form, as I see it."

From 1908 Mondrian spent several summers on the Dutch North Sea coast of Zeeland, which provided the inspiration for a number of paintings. He regularly stayed at Domburg, where an avant-garde artistic community gathered, and he found his subjects in the town, along the sea dunes and in neighboring areas. One of these was the small rural village of Zoutelande, whose Gothic church tower has been identified as the subject of this painting.

It's likely that Mondrian made the painting in his studio either while on holiday or once he returned to Amsterdam rather than on the spot, and his memory may have been aided by photographs. Examination of the canvas shows that the artist originally painted Sun, Church in Zeeland on a slightly larger stretcher, setting the tower a little to the left and allowing the beginnings of the spire to be seen at the top. He must have soon rethought this because at a very early stage the canvas was placed on a smaller stretcher and painted areas at the top and right were folded over to make the tower central and exclude the spire. The resulting painting is more frontal and direct than first conceived. 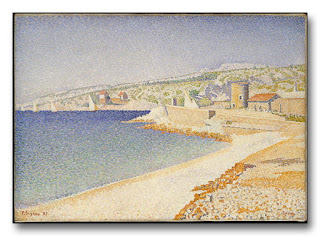 MET notes:
Between 1887 and 1891, Signac spent the warmer months pursuing his two passions, marine painting and boating, on excursions to seaside resorts. One of five views made during a trip to the Mediterranean port of Cassis in April–June 1889, this work was singled out for praise when the series debuted at the Salon des Indépendants later that year. At Cassis, Signac found "White, blue and orange, harmoniously spread over the beautiful rise and fall of the land. All around the mountains with rhythmic curves." Until 1894, he evoked analogies with musical compositions by inscribing each of his pictures with an opus number. 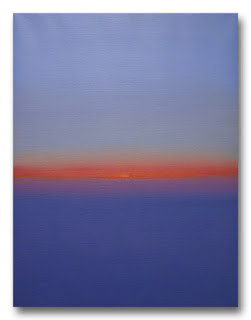 Art UK notes:
Painter, teacher and architect, John Miller was born in London. After National Service he worked at a variety of jobs, before becoming a full-time painter. For a brief period, he was an actor in films, theatre and television and in the early 1950s ran L'Elixir, a coffee bar and restaurant on Richmond Hill, Surrey, with his close friend and companion, Michael Truscott, the potter, picture framer and restorer, as its chef; although it was a success, with the writer Beverley Nichols and singer Eartha Kitt among its clients, it was demolished because of road widening.

He next studied architecture and was articled to the church architects Milner and Craze. In 1958 he moved to Cornwall, settling in the Penwith peninsula, and becoming a member of the Newlyn Society of Artists in 1961, serving as chairman for some years.

His seventieth-birthday show at the Portland Gallery, 2001, was a sell-out, by which time Miller's richly colored pictures of sky, sea and sand, of the Hayle Estuary and of Tresco, Isles of Scilly, had become almost his trademark.

Miller has work in public and private collections around the world. His seventieth-birthday show at the Portland Gallery, 2001, was a sell-out, by which time Miller's richly colored pictures of sky, sea and sand, of the Hayle Estuary and of Tresco, Isles of Scilly, had become almost his trademark. 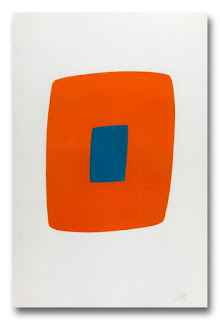 Wiki notes:
In 1956, Ellsworth Kelly met Robert Indiana, who moved in the same building and they became partners. Indiana became his mentor. They broke up around 1964. One of the reasons was Indiana's use of words in his paintings which Kelly considered such technique not worthy of high art. 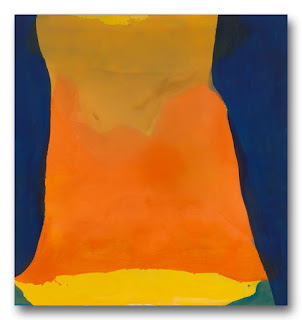 Helen Frankenthaler:
"A really good picture looks as if it's happened at once. It's an immediate image. For my own work, when a picture looks labored and overworked, and you can read in it—well, she did this and then she did that, and then she did that—there is something in it that has not got to do with beautiful art to me. And I usually throw these out, though I think very often it takes ten of those over-labored efforts to produce one really beautiful wrist motion that is synchronized with your head and heart, and you have it, and therefore it looks as if it were born in a minute."