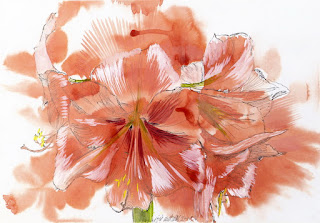 Thomas Eyck, Dutch curator:
Erik Andriesse, a Dutch artist, painted many types of flowers, all bursting with color. He matured early with his first exhibition at age fifteen and died at only age thirty-six.

Dutch novelist, Oek de Jong:
"Why do I admire the work of Erik Andriesse? When I first saw it in the 1980s, his craftsmanship and provocative virtuosity enraptured me, a young artist who just happened to draw and paint beautifully. Which, at that time, the art world found rather disquieting. For me, however, it was liberating. Here and there I saw Erik Andriesse's now classic amaryllises and sunflowers; always so distinctive." 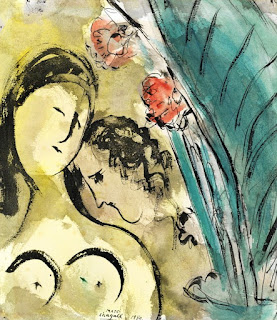 Source: Wiki:
After barely escaping France during WWII in 1941, Jewish Marc Chagall lived in the US until 1947, when he returned to France, where he painted this painting in 1950. 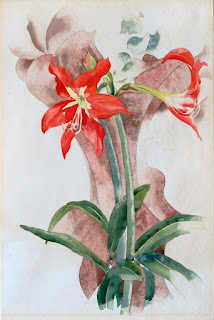 Museum note:
This watercolor was purchased by the Cleveland Museum of Art during its first exhibition, at Daniel Gallery in New York, and was one of the first works by Charles Demuth to enter a public museum collection.

Still-life was one of Charles Demuth's favorite genres, and he created works on this theme throughout his career. This drawing of a blooming amaryllis was completed while the artist was convalescing with diabetes in his hometown, Lancaster, Pennsylvania. Because of his physical weakness, he was limited to working in watercolor, a less demanding medium than painting, and to subjects that he could easily observe, such as flowers. Demuth drew the amaryllis' form in graphite and then brushed on watercolor precisely, using a blotter to develop the pebbly texture seen throughout. 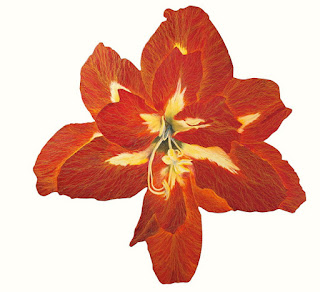 US State Dept:
Leigh Wen was born in Taipei, Taiwan. She received her B.F.A. from Washington State University in 1984, and from the State University of New York at Albany an M.A. in Fine Arts in 1985 and M.F.A. in 1994. She's exhibited nationally and internationally since early 1980's. In 1979, she won the First Prize in Painting Ten Outstanding Young Talents Competition Taiwan. In 1980, she was awarded Outstanding Merit Young Artists in Asia Now competition in Hong Kong. A break in her career occurred following her marriage in 1985 and the raising of two children. She returned to her career in 1992 by pursuing her M.F.A. at then she has devoted herself to art full time with increasing success and recognition.
Read more about her successful artistic  career at the US State Department and see more of her art HERE. The artist's website is HERE. 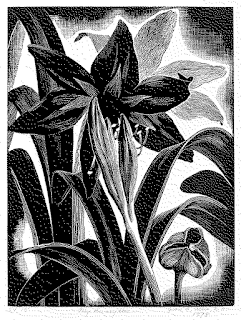 Source: Wiki:
Grace Thurston Arnold Albee (1890-1985) was an American printmaker and wood engraver. During her sixty-year career life, she created more than two hundred and fifty prints from linocuts, woodcuts, and wood engravings. She received over fifty awards and has her works in thirty-three museum collections. She was the first female graphic artist to receive full membership to the National Academy of Design.
Albee's works are represented in a number of public collections in the United States, including the Metropolitan Museum of Art in New York. In 1976, eighty of her works were displayed in a retrospective exhibition in the Brooklyn Museum. The Library of Congress has 23 of her prints in its collection. Her works are also housed the Smithsonian Institution, in the Rosenwald Collection in the National Gallery of Art in Washington, D.C., in the Permanent Collection of the National Museum of Women in the Arts, the Georgia Museum of Art, the Cleveland Museum of Art, and the Boston Public Library. 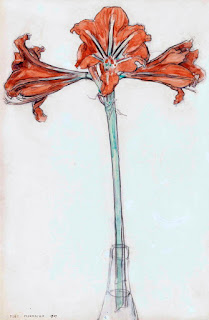 "It is in flowers that external feminine beauty manifests itself most effectively." -Piet Mondrian

Catalogue note edited:
Mondrian Flowers in American Collections, the first major exhibition devoted to the artist's body of work in this genre, took place 47 years after his death, at the Sidney Janis Gallery, New York, in 1991, and subsequently travelled to the Modern Art Museum of Fort Worth. Published concurrently was the first monograph on this subject, David Shapiro's Mondrian: Flowers, New York, 1991. 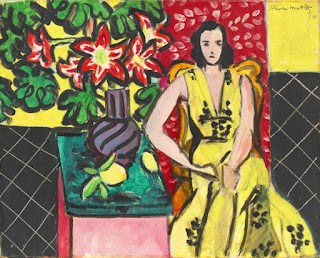 Source: Wiki:
While the Nazis occupied France from 1940 to 1944, they were more lenient in their attacks on "degenerate art" in Paris than they were in the German-speaking nations under their military dictatorship. Matisse was allowed to exhibit along with other former Fauves and Cubists whom Hitler had initially claimed to despise, though without any Jewish artists, all of whose works had been purged from all French museums and galleries; any French artists exhibiting in France had to sign an oath assuring their "Aryan" status-including Matisse.

This was painted in 1941 the same year Matisse was diagnosed with duodenal cancer. The surgery, while successful, resulted in serious complications from which he nearly died. Being bedridden for three months resulted in his developing a new art form using paper and scissors. 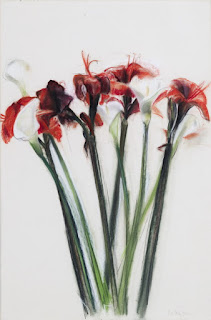 Source Wiki:
Michael Burton Mazur (1935-2009) was an American artist who was described by William Grimes of The New York Times as "a restlessly inventive printmaker, painter, and sculptor." Born and raised in New York City, he received a bachelor's degree from Amherst College in 1958, then studied art at Yale.

Mazur first gained notice for his series of lithographs and etchings of inmates in a mental asylum, which resulted in two publications, "Closed Ward" and "Locked Ward." Over the years, he worked in printmaking and painting. His series of large-scale prints for Dante's Inferno won critical acclaim, and were the subject of a traveling exhibition organized by the University of Iowa in 1994. Later he concentrated on creating large, lyrical paintings which make use of his free, gestural brushwork and a varied palette. Some of these paintings were seen in an exhibition of 2002 at Boston University, "Looking East: Brice Marden, Michael Mazur, and Pat Steir."

The Museum of Fine Arts, Boston, has acquired a definitive collection of Mazur's prints. Mazur's work is owned by museums including the Art Institute of Chicago, the British Museum, The Fogg Museum, the Philadelphia Museum, Whitney Museum, Yale Art Gallery, the Iris & B. Gerald Cantor Center for Visual Arts at Stanford University.

Posted by Bruce McMillan at 9:47 AM