These paintings of Iceland were
all painted by artists from what country?

Is this a trick question? Yes or no?

About the Art after the Quiz Below
But first the art and location in Iceland... 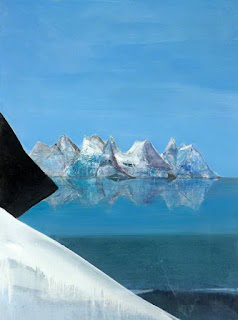 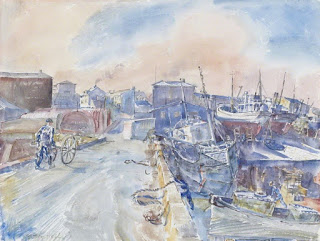 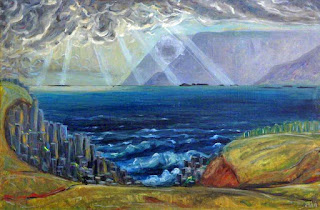 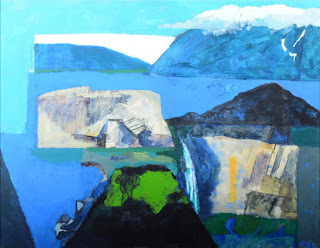 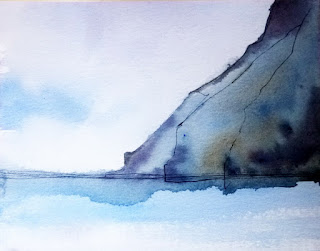 5
Látraströnd, North Iceland,
on the east coast of Eyjafjörður
north of the village Grenivík 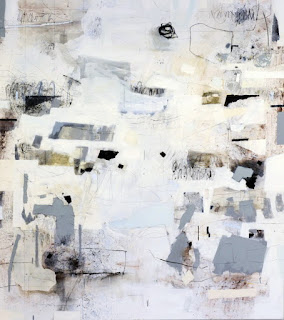 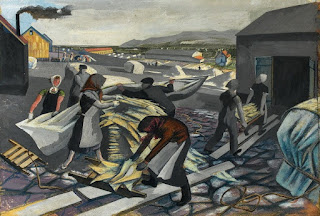 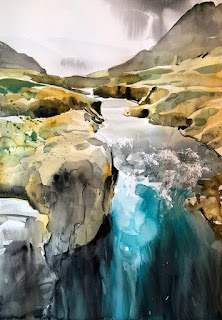 8
In the central north around Akuryri

These paintings of Iceland were all

painted by artists from what country?
E) Great Britain

Is this a trick question? Yes or no?
Yes and no.

Keith Grant was born in Liverpool. He attended Willesden Art School then went to the Royal College of Art. A trip to Iceland as a student began an ongoing devotion to landscape painting and a great love of the Arctic region: "It is in the North and only in the North, that I sense the value of my life." Attracted to isolated incidents of nature, a subject that was to inspire him for the majority of his career, Grant sees his work as similar to pages in a diary, documenting his journeys through painting to give the viewer an experience or sense of the untouched parts of the world. This particular work was purchased from a solo exhibition held at Rochdale Art Gallery in 1976 of more than 100 of Grant's works.

Watercolor painter, draughtsman, writer and poet, Thomas Hennell was born at Ridley, Kent He studied at Regent Street Polytechnic for several years in the early 1920s, then qualified as a teacher. He taught art for several years. He researched his first book, Change in the Farm, in Britain, and Ireland, mainly by bicycle, recording in words and pictures vanishing country crafts and ways.

In 1931 was friendly with artists based in Great Bardfield, Essex. From 1932-5 was treated for psychiatric illness, which he wrote about in The Witnesses. During World War II Hennell was an Official War Artist in Europe and the Far East, dying in mysterious circumstances in Java. The Imperial War Museum holds a large collection of his pictures, which are in many other public galleries. Hennell was a keen student of English watercolor painting and wrote well on it. Although not a great natural draughtsman, he improved his technique to become a fine atmospheric and distinctive watercolorist. Victoria Art Gallery, Bath, held a survey show in 1995.

Hergilsey is a small Icelandic island on the north shore of Breiðafjörður. The island covers about 30 other islets.

Roy Bizley was an art teacher, teaching at the School of Art in Swindon. In 1964 Roy moved to Leicester for a teaching post at Leicester Polytechnic, which later became De Montfort University. In 1975, following a visit to Iceland, Roy made a large series of paintings, which followed the contemporary abstraction movement of the time, typically using nature derived blues and greens alongside more synthetic colors. He made many return visits to Iceland and undertook a residency in 1995, sponsored by the National Gallery of Iceland. This resulted in a major show of Icelandic landscapes at Leicester's City Gallery, in Granby Street in 1997. Leicester's New Walk Museum also has a large Icelandic painting in its collection. Roy died in 1999, very soon after his school retirement. A major retrospective of Roy's work, paintings, posters and prints, was held at the Trinity House Gallery at De Montfort University in 2000.

Látraströnd is on the coast of Eyjafjörður north of the village Grenivík, facing the island of Hrisey. It was named after the northernmost farm, Latrar, abandoned for decades like others in the area except for the southernmost one or two. There is very limited lowland along the coastline and it drops off steeply into the sea.

This was painted on a sailing tour. Rob Miller is the Resident Artist for the Lingholm Estate on the shores of Derwentwater in the Lakes district in northwest England in in the county of Cumbria, UK. He paints often in Spain and Portugal. His art has been featured in Spanish, Portuguese and British publications and he as the featured artist in the Art of England and in Art News. The artist's website is HERE.

Education: Bolton University, BA, a distinction in painting, MA, History of Art. Rob Miller, FRSA, has his studio, Falcon Mill Studios, in Bolton, Lancashire, UK. FRSA, Fellowship of the Royal Society for the Encouragement of Arts, Manufactures and Commerce is an award granted to individuals that the Royal Society of Arts (RSA) judges to have made outstanding achievements to social progress and development. As of 2020 there are 30,000 Fellows.

Patti Lean lives in the southwest of Scotland, a few miles north-west of Castle Douglas. Patti Lean: "My interest is in notions of northerliness, both real and imagined." The artist's website is HERE.

Sorrell made a trip to Iceland in 1934, and drawings inspired by this trip were exhibited at Walkers Gallery, Bond Street, London in 1935.

Alan Sorrell (1904-1974) attended the Royal College of Art in the mid-1920s. During his life Sorrell produced a vast cycle of murals (nearly 20 over a 30-year period). Sorrell is principally remembered today as an illustrator of articles on archaeology for The Illustrated London News and books ranging from Roman Britain to The Holy Bible, more than 15 books over a period of 40 years. Sorrell made numerous journeys to distant lands, painting in Iceland (1934), Greece and Turkey (1954), Egypt and the Sudan (1962).

The artist's website is HERE and Instagram HERE.
Keith Hornblower conducts art workshops in Iceland. He's an architectural illustrator by profession, a Fellow of the Society of Architectural Illustration. But now he enjoys the freedom of painting fast and loose with a spontaneity out of bounds for an illustrator. His work has been exhibited in galleries and exhibitions. He's a frequent exhibitor at the Mall Galleries with the Royal Institution of Painters in Watercolour, where he was honored with the Schmincke award for an outstanding work.

Posted by Bruce McMillan at 9:54 AM