The Art of the Pear 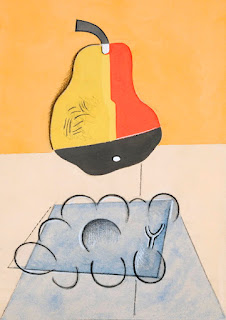 Wiki edited:
Stuart Davis was an early American modernist painter. In the 1920s he developed his mature style, painting abstract still lifes and landscapes. His use of contemporary subject matter such as cigarette packages and spark plug advertisements suggested a proto-pop art element to his work. He painted series, works with similar structures, but with altered colors or added geometric embellishments, essentially creating variations on a theme. Some commentators suggest that this aspect of his work parallels his love of jazz in which a basic chord structure is improvised upon by the musicians.

He was well known for his jazz-influenced pre-popart paintings of the 1940s and 1950s, bold, brash, and colorful, as well as his Ashcan School pictures in the early years of the 20th century. With the belief that his work could influence the sociopolitical environment of America, Davis' political message was apparent in all of his pieces from the most abstract to the clearest. 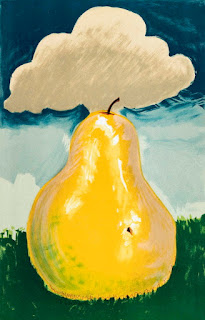 Wiki edited:
Erik Satie (1866-1925) was a French composer and pianist. Satie, and eccentric, was an influential artist in the late 1800s to early 1900s Parisian avant-garde. His work was a precursor to later artistic movements such as minimalism, repetitive music, and the Theatre of the Absurd.

American Man Ray met the French native Erik Satie in 1921, shortly after the Man Ray arrived in Paris. The French composer was more than 20 years older than Man Ray. Despite Satie's crippling shyness and eccentricities, he was a key figure in French society. He was renowned not only for his musical works, but also for his writing and art pranks. He met with Man Ray in December 1921 on the eve of Man Ray's first French solo exhibition. The pair retired to a café for hours.

Man Ray, born Emmanuel Radnitzky, was an American visual artist who spent most of his career in Paris. He was a significant contributor to the Dada and Surrealist movements, although his ties to each were informal. He produced major works in a variety of media but considered himself a painter. He was best known for his photography, a renowned fashion and portrait photographer. Man Ray is also noted for his work with photograms, which he called "rayographs" in reference to himself. 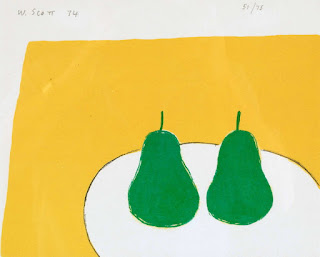 Chloë Ashby, on ArtUK, (full article HERE)
Scott's heyday was in the 1950s. His exhibition at London's Hanover Gallery in 1953 was seen by directors at the Guggenheim and MoMA, who went on to sing his praises in the US. In 1958, he was the UK's chief representative at the Venice Biennale. In 1961, David Sylvester said that he had gained 'the soundest, all-roundest international reputation of any living British painter, Nicholson apart', and in 1973 Hilton Kramer called him 'the best painter of his generation in England'. But with the arrival of Pop Art, he fell from favour – until the 2000s, when twentieth-century British art began to gain in popularity.

And what a relief, because there's so much pleasure to be gained from looking at Scott's art, spartan as it is. He took the ordinary and made it extraordinary. Like any good designer, he understood the power of well-placed white space. It's there, as in a well-timed pause, that we have time and space to feel. And feel you will. Because empty as Scott's paintings may seem, each is invested with emotion. That, and a lingering human presence, in a snuffed candle, a simmering pan, a sliced lemon.

Note:
He was born at Greenock, Scotland, of Irish and Scottish parents and was brought up in Ulster. He studied at Belfast College of Art, 1928-31, and the Royal Academy, 1931-5. Known for still-life and abstract painting, William Scott is the most internationally celebrated of 20th-century Ulster painters. 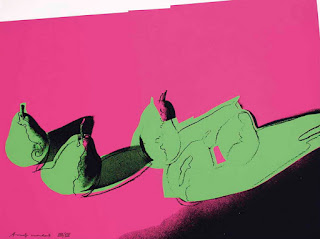 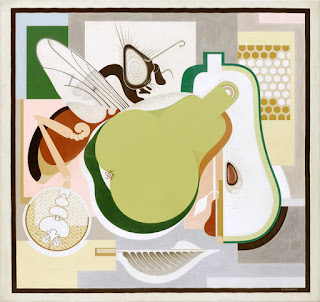 MoMA gallery note:
"If that's painting, that's what I want to do," Murphy remarked in 1922, upon discovering paintings by Pablo Picasso, Henri Matisse, Georges Braque, and Juan Gris in a Paris gallery. Soon after, he ended his career as a landscape architect and turned to painting. In Wasp and Pear, he combined anatomically detailed and highly stylized depictions of his subjects—a wasp, pear, leaf, and honeycomb—with an abstract background of overlapping planes of color. As his inspiration, Murphy credited the "technically drawn and colored charts of fruits, vegetables . . . [and] insects" found in a classroom in which he studied during his military training.

Wiki edited:
Gerald only painted from 1921 until 1929. He's known for his hard-edged still life paintings in a Precisionist, Cubist style. During the 1920s Gerald Murphy, along with other American modernist painters in Europe, notably Charles Demuth and Stuart Davis, created paintings prefiguring the pop art movement. Gerald and his wife Sara were wealthy, expatriate Americans who'd moved to the French Riviera in the early 20th century and who, with their generous hospitality and flair for parties, created a vibrant social circle, particularly in the 1920s, that included a great number of noted artists and writers. Pablo Picasso, a friend of Sara, painted her in several of his 1923 works. 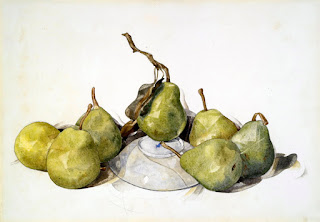 "Search the history of American art," wrote Ken Johnson in The New York Times, "and you will discover few watercolors more beautiful than those of Charles Demuth. Combining exacting botanical observation and loosely Cubist abstraction, his watercolors of flowers, fruit and vegetables have a magical liveliness and an almost shocking sensuousness." 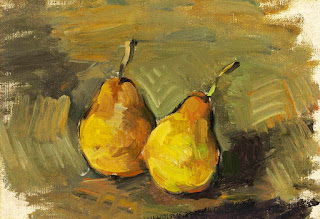 Christie's Auction notes edited:
This was painted in a difficult period in Cézanne's personal life, as he shuttled between his family's estate at Aix and the apartment in Paris where he had installed his mistress, Hortense, and their young son, Paul, whose existence he hid from his authoritarian father. The deliberate and meditative work of still-life painting seems to have offered the artist a respite, as he strove to transform Impressionism into "something solid and durable like the art of the museums."

"He produced a few canvases representing only isolated fruit," Henri Loyrette wrote. "These can be viewed as studies in which the artist examined his subject from every angle, thoroughly perusing their globular forms, seemingly simple, in reality quite complex: in short, as visual exercises in which he practiced his tonal scales, carefully gauging the effect produced by juxtapositions of greens, yellows, and reds. Alternatively, they can be regarded as self-sufficient little pictures that, like Manet's Asparagus, deliberately reject the contrivances visible in the larger works to showcase motifs so simple as to border on abstraction."

Deux poires was featured in Cézanne's inaugural one-man show, held at Ambroise Vollard's gallery in 1895; it is one of only fourteen stilllifes that have been conclusively identified from this watershed exhibition, which catapulted Cézanne out of relative obscurity. At the Vollard show, Deux poires caught the eye of Nicolas-Auguste Hazard, a connoisseur of Daumier's work, who had never before owned a Cézanne; he purchased the canvas in February 1896 and retained it until his death. Deux poires later belonged to Baron Kojiro Matsukata, a Japanese businessman who lived in Paris during the 1920s and devoted his personal fortune to amassing a major collection of French painting and sculpture, a portion of which today forms the nucleus of the National Museum of Western Art in Tokyo. 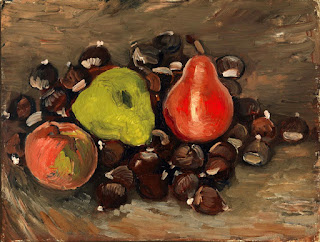 Vincent Van Gogh Museum and The Art Newspaper edited:
In 1960 Bruno and Sadie Adriani donated the painting to the Fine Arts Museums of San Francisco. However, at that point it was assumed to have been done by Van Gogh in Nuenen in 1884 and the coloring appeared unusual for that period. This raised concerns and the painting was apparently not displayed.

Its authenticity in doubt in 2019 it was confirmed, based on information concerning style, technique and also provenance by the Vincent Van Gogh Museum. It is mentioned in the inventory list of Theo van Gogh's collection of 1890. Traditionally, it was assumed that this work was painted during Van Gogh's stay in Nuenen, and hence the doubts. One of the arguments for re-attribution the work to Vincent van Gogh was the fact that Still Life with Fruit and Chestnuts most closely resembles the Paris Autumn still life Prawns and mussels (September-November. 1886) from Van Gogh in terms of style, color scheme and subject matter.

Also, the small size of Prawns and mussels is very similar compared to the Still life with fruit and chestnuts, and the same brown background, but now with brightly colored seafood on top. One may consider them pendants, both paintings displaying a quick and steady hand, working wet in wet with the same buttery consistency of the paint and a similar size of brushstrokes.

Posted by Bruce McMillan at 9:22 AM