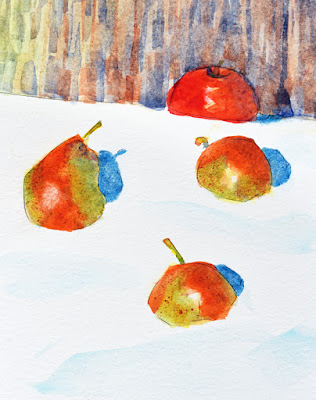 The highest price paid for a Franz Marc painting is $20,201,000 USD. That painting is the last one below. 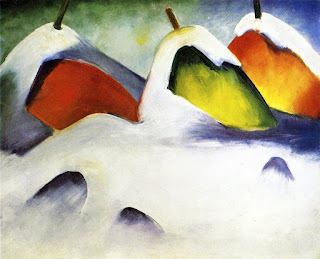 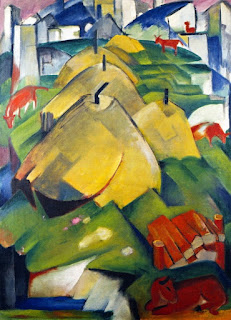 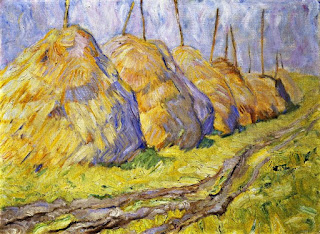 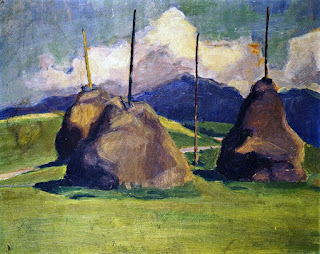 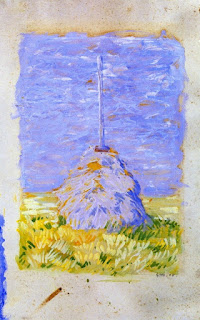 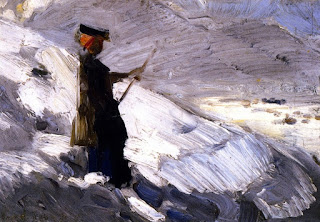 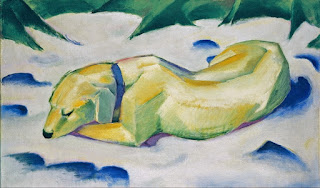 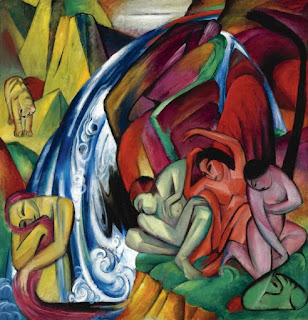 8
The Waterfall
(Women Under A Waterfall)
Der Wasserfall (Frauen Unter
Einem Wasserfall)
Franz Marc (1880-1916) German
Oil on canvas, 63" x 65" (w x h), 1912
Sotheby's November 2007 Auction
Estimate $20,000,000 - $30,000,000 USD
Sold $20,201,000 USD, highest price for a Franz Marc
Sotheby's Notes (edited):
Marc's colorful The Waterfall is a pivotal work of the German Expressionist movement, created at the dawning of a new era in 20th century painting. He painted Der Wasserfall in Sindelsdorf, a small town on the foothills of the Bavarian Alps. Similar to the Impressionists before him, Marc and his colleagues August Macke and Heinrich Campendonk wanted to escape the city and seek inspiration from the countryside. In 1910 he moved to this area because he was attracted by its bucolic splendor and the abundance of farm life.
Marc chose as his subject for this painting one of nature's most dramatic and powerful spectacles -- a waterfall. The natural formation and its surroundings define the rhythm of the composition. He made the unusual choice of including human figures along with animals in this composition, underscoring the harmony between the human and animal kingdom. He unified all of these elements through a series of colorful diagonal formations. The blue and white spill of the falls reiterates the movements of the figures. This landscape of towering rocks and rapid falls has a strong primal and mystical quality that is totally opposed to the pastoral and realistic aesthetic of academic landscape painting.
Marc explained to August Macke that his coloration was not arbitrary and that his color choices represented specific characteristics, "Blue is the male principle, severe, bitter, spiritual and intellectual. Yellow is the female principle, gentle, cheerful, and sensual. Red is matter, brutal and heavy, the color that must be fought and overcome by the other two!" (quoted in Angelica Zander Rudensteine, The Guggenheim Museum Collection: Paintings 1880-1945, volume II, New York, 1976, page 493).
This picture was once in the collection of Marie von Schintling, who acquired this work around 1917 and kept it in her collection in Germany. In 1939 she sent the painting to the New York dealer Curt Valentin so that it could be exhibited on the occasion of the San Francisco Golden Gate Exhibition. The painting remained in the United States throughout World War II, and it was eventually sold to the American collector Samuel G. Dretzin and then to the Guggenheim Museum in New York.

About Franz Mark (Edited source, Wiki):
Franz Moritz Wilhelm Marc (1880-1916) was a German painter and print maker, one of the key figures of German Expressionism. In 1911 he was a founding member of The Blue Rider (Der Blaue Reiter), a journal whose name later became synonymous with the circle of artists collaborating in it, including Auguste Macke and Wassily Kandinsky.
Marc was born in 1880 in Munich, then the capital of the Kingdom of Bavaria. His father, Wilhelm Marc, was a professional landscape painter; his mother, Sophie, was a homemaker and a devout, socially liberal Calvinist.
With the outbreak of World War I in 1914, Marc was drafted into the German Army as a cavalryman. By February 1916, as shown in a letter to his wife, he'd gravitated to military camouflage. His technique for hiding artillery from aerial observation was to paint canvas covers in broadly pointillist style. He took pleasure in creating a series of nine such tarpaulin covers in styles varying "from Manet to Kandinsky", suspecting that the latter could be the most effective against aircraft flying at mile or higher.
After mobilization of the German Army, the government identified notable artists to be withdrawn from combat for their own safety. Marc was on the list but was struck in the head and killed instantly by a shell splinter during the Battle of Verdun in 1916 before orders for reassignment could reach him.
After the National Socialists took power, they suppressed modern art; in 1936 and 1937, the Nazis condemned the late Marc as a degenerate artist and ordered approximately 130 of his works removed from exhibition in German museums. His painting Landscape With Horses was discovered in 2012 along with more than a thousand other paintings, in the Munich apartment of Cornelius Gurlitt whose dealer father, Hildebrand Gurlitt, was a collector of Modernist art the Nazis called degenerate.
Marc's family house in Munich is marked with a historical plaque. The Franz Marc Museum opened in 1986, and his dedicated to the artist life and work. It houses many of his paintings, and also works by other contemporary artists. The website for the Franz Marc Museum in Upper Bavaria is HERE.

Posted by Bruce McMillan at 4:28 PM