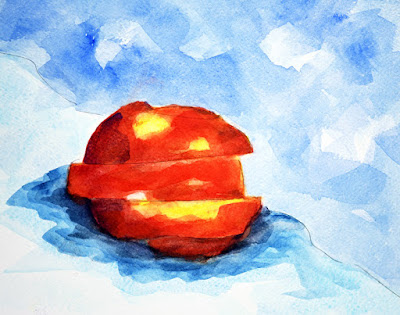 Ambrosia at the Precipice

Now, as an apple,
divided this day, it stood
at the precipice.

metaphor noun. a figure of speech in which a word or phrase literally denoting one kind of object or idea is used in place of another to suggest a likeness or analogy between them. e.g.: 1) an apple as a globe, divided, representing climate change. 2) an apple as a country's population, divided, facing the loss of their principles, in effect, the loss of their democracy.

ambrosia noun. 1) a type of apple. 2) the food of the Greek and Roman gods.

precipice noun. a hazardous situation.
Posted by Bruce McMillan at 2:37 AM