Now and Then... Ogunquit Stamp 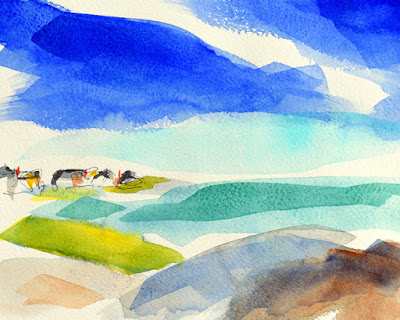 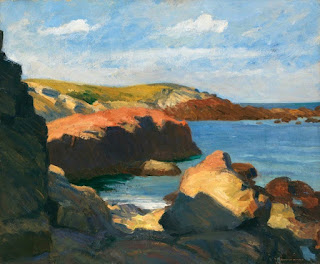 1
Sea at Ogunquit
Edward Hopper (1882-1967), American
Oil on canvas, 29" x 24" (w x h), 1914
Whitney Museum of Art, New York
Sea at Ogunquit was exhibited in 1917 at the First Annual Exhibition at the American Society of Independent Artists in New York City as Hopper was trying to transition his career from illustrator to painter.

It features a view from Narrow Cove, Ogunquit, Maine, where artists used to congregate. Today it's the view from the Ogunquit Museum of American Art, looking east to the Atlantic Ocean. The green knoll is barely seen, the point now covered in expensive houses. 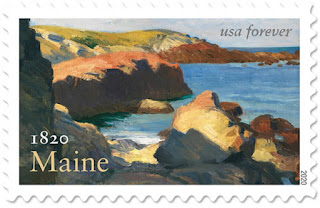 2
Forever Stamp
Maine became the 23rd state on March 15, 1820. Marking the 200th anniversary of Maine's statehood, a sheet of new stamps from the U.S. Postal Service features the iconic rocky shoreline painted by Edward Hopper (1882-1967). It was painted during one of his many summers in the state. In the coastal village of Ogunquit, an art colony since 1898, Hopper met art student Jo Nivison, whom he later married in 1924.

The Maine Statehood stamp debuted in March 2020, a sheet of twenty FOREVER stamps for $11.00. 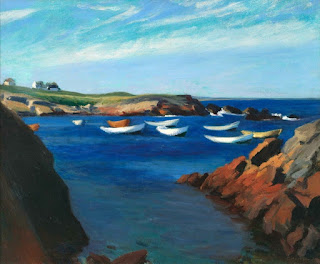 3
The Dories, Ogunquit
Edward Hopper (1882-1967), American
Oil on canvas, 29" x 24" (w x h), 1914
Whitney Museum of Art, New York
Charles Woodbury established a summer painting school in 1898 in Ogunquit, Maine. It garnered national interest and inspired the formation of an art colony that drew the likes of Edward Hopper, George Bellows, and Robert Henri, who'd been Hopper's art teacher in New York City at the New York School of Art and Design, the forerunner of Parsons The New School for Design. Only with Woodbury's death in 1940 did his Art of Seeing school close its doors, and even so the art association his former students established has remained active to this day. 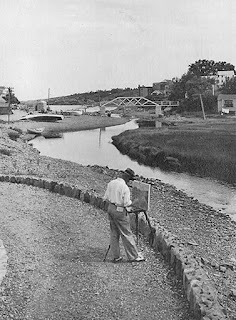 4
Perkins Cove with Unknown Artist
Possibly Henry Strater, circa 1930s
Source: Ogunquit Museum of American Art HERE
This is the view looking out from now Perkins Cove to the Atlantic. In the far right, unseen, is Narrow Cove where Hopper painted in 1916. 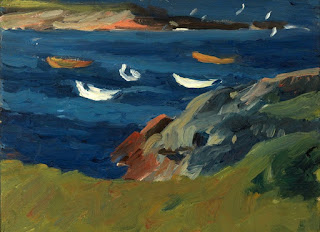 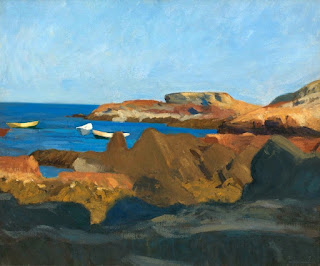 6
Cove at Ogunquit
Edward Hopper (1882-1967), American
Oil on canvas, 28" x 25" (w x h), 1914
Whitney Museum of Art, New York
In the summer of 1914 he painted in Ogunquit, Maine. The previous year, shortly after his father's death, Hopper had moved to the 3 Washington Square North apartment in the Greenwich Village section of Manhattan, where he would live for the rest of his life. From there he'd travel in the summers for the rest of his life, often to New England, Maine, Massachusetts, and Vermont. 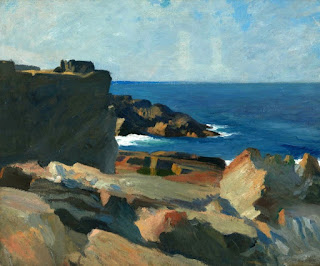 7
Square Rock, Ogunquit
Edward Hopper (1882-1967), American
Oil on canvas, 29" x 24" (w x h), 1914
Whitney Museum of Art, New York
Josephine Nivison had met her future husband Edward Hopper in art school, and then again in 1914 in Ogunquit, where they were staying in the same boarding house. However, their friendship apparently only began some years later.

At an impasse over his oil paintings, in 1915 Hopper turned to etching. For the next few years, when he could, Hopper did some outdoor watercolors on visits to New England, especially at the art colonies at Ogunquit, and on Monhegan Island. But it wouldn't be until 1923 while painting with Robert Henri when he'd re-encounter his future wife, Josephine Nivison, in the summer at Gloucester, Massachusetts that, with her help, his career took off. They married in 1924.

In late 1905 at the New York School of Art student Josephine Nivision met teacher Robert Henri, who asked her to pose for a portrait. In February 1906, Nivison began her career as public schoolteacher. During the next decade she earned her living by teaching, but never abandoned art and remained in touch with Henri and many other artists.

Museum notes:
At the beginning of the twentieth century, Robert Henri was among the most respected artists and instructors advancing modernism in the country, known for breaking ground with his gritty, urban landscapes and informal portraits. This portrait of art student Josephine Nivison aptly demonstrates Henri's rejection of conservative, academic standards through his emphasis on naturalism and spontaneity, as well as the sitter's informal dress and pose. Jo went on to have continued fame as a model if not artist: she posed for and is the subject of many of the paintings by her famous husband, the painter Edward Hopper.

Posted by Bruce McMillan at 1:14 AM