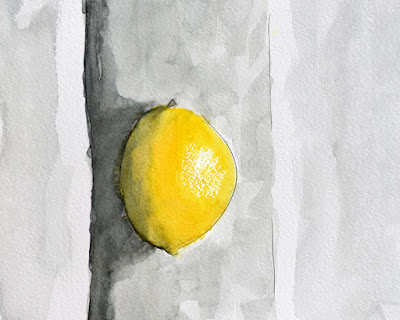 Lemon Sunning on a Beech

"A marriage of color conveying a message of strength and hopefulness that is both enduring and uplifting." The Pantone Color Institute
"Yellow and Gray? They play well together." Bruce McMillan 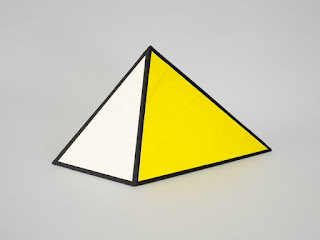 1
Pyramid (Maquette)
Roy Lichtenstein (1923-1997), American
Collage paper and tape on foam-core,
30" x 15" x 8", circa 1996
Whitney Museum of American Art, New York
Wiki:
During the 1960s, along with Andy Warhol, Jasper Johns, and James Rosenquist among others, Roy Lichtenstein became a leading figure in the new art movement, Pop art. His work defined the premise of pop art through parody. Inspired by the comic strip, Lichtenstein produced precise compositions that documented while they parodied, often in a tongue-in-cheek manner. He described pop art as "not American painting but actually industrial painting."

While Whaam! and Drowning Girl are generally regarded as Lichtenstein's most famous and influential works, his most expensive piece is Masterpiece, which was sold for $165,000,000 in January 2017, seen HERE. 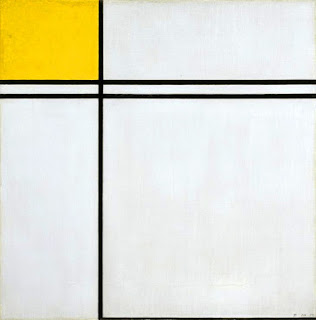 2
Composition with Double Line and Yellow
Piet Mondrian (1872-944), Dutch
Oil on canvas, 60" x 60" (w x h), 1932
National Galleries Scotland, Edinburgh, Scotland
Museum notes:
Mondrian was the leading artist of the 'De Stijl' (the style) movement, a group of Dutch artists who produced strictly geometric, abstract art. Mondrian's early work painted from nature became increasingly abstract. For example, a series of studies of trees and their branches made from 1909 to 1913 evolved into a crisscross of lines. However, it was when he became a member of the Theosophist group that he began to paint the grid paintings with which he is associated. Theosophists saw existence in terms of harmony between male and female, positive and negative, horizontal and vertical. Mondrian's paintings embody this sense of balance.

This is one of the earliest of Mondrian's so-called tram-line paintings. Before 1932 he had used single lines but he began pairing them in order to achieve a sense of optical movement. He also began to extend the coloured areas over the edge of the canvas. In this painting, Mondrian created a perfect balance between the colour and the horizontal and vertical lines, so that no one element dominated. He painted with great precision, although he did so intuitively by trial and error, not through mathematical calculation. This painting formerly belonged to the artist Winifred Nicholson, who acquired it directly from Mondrian. 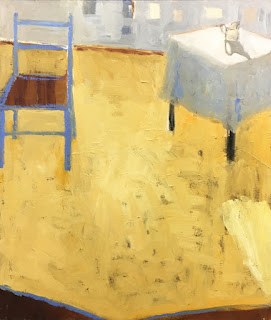 3
Yellow and Gray Interior
Terry Wise (circa 1954- ), American
Oil on panel, 25" x 29" (w x h), 2019
Berkshire Museum, Pittsfield, Massachusetts
Artist statement:
"Energetic, a bit chaotic, quirky, multi-layered, traditional, community-oriented. This could be a description of my personality or my life or my paintings. With my strong maternal line and influence, the domestic setting and ideas of home are standard in my work. Chairs, plates, or repeat patterns of textiles often enter into my experiments with color and composition. I'm a fan of the mid-20th century realist painters who employed varying viewpoints in a single painting.

Yellow and Gray Interior is simpler than many of my table views, focused more on composition through blocks of color, with just a hint of an interior space and an implied narrative of who might have gotten up from the chair. Sometimes I insert my maiden name, Bryant, Terry Bryant Wise, but for painting I use Terry Wise; it's simpler. I live in Stockbridge, Massachusetts." 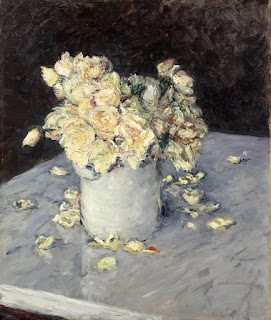 4
Yellow Roses in a Vase
Gustave Caillebotte (1848-1894), French
Oil on canvas, 18" x 21" (w x h), 1882
Dallas Museum of Art, Dallas, Texas
Dallas Museum notes:
A bouquet of yellow roses is set on a marble table against a dark ground. The flowers are shown full-blown, just at the moment when their lush, open petals have begun to drop. The intense drama of the painting results from the contrast between the minimalist elegance of the composition and the thickly painted roses at its center. Yellow Roses in a Vase was painted during Gustave Caillebotte's first serious engagement with the genre of still life. Between 1881 and 1883, he painted more than thirty still lifes, reflecting a renewed interest in the genre among several artists of the impressionist circle, most notably Claude Monet, who shared Caillebotte's Paris studio in 1882. Yellow Roses in a Vase remained with Caillebotte throughout his life and was purchased after his death in 1894 by Edgar Degas, who collected the works of his fellow artists with great acumen, as had Caillebotte himself. 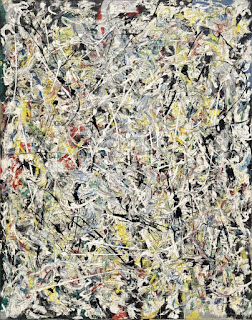 5
White Light
Jackson Pollock
Oil, enamel, and aluminum paint on canvas,
38" x 48" (w x h), 1954
MoMA, Museum of Modern Art, New York
Museum notes:
White Light is one of Pollock's last paintings and the only one he completed in 1954. He made it in part by squeezing paint directly from a tube onto the canvas evident in the sculptural white and black tendrils of paint that constitute the top layers. He also used a brush, creating subtle marbling effects by manipulating wet paint in certain areas. 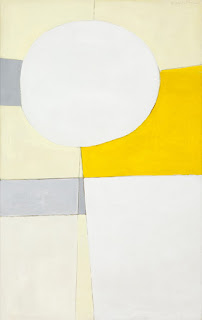 6
White Sun
Beatrice Mandelman (1912-1998), American
Oil on canvas, 30" x 40" (w x h), circa 1960
Harwood Museum of Art, Taos, New Mexico
Museum notes:
Born on December 31, 1912 in Newark, New Jersey, from an early age Beatrice Mandelman was determined to be an artist. At age 12, she began taking classes at the Newark School of Fine and Industrial Art. In the 1930s, she attended Rutgers University, the Newark School of Fine and Industrial Art and the Art Students League in New York City. In 1944 Beatrice Mandelman and Louis Ribak left New York City and settled in Taos, NM, forming the nucleus of painters who would come to be known as the Taos Moderns. Big-city contemporaries of Willem de Kooning, Arshile Gorky and Jackson Pollock, their relocation to the Southwest propelled them in a new direction of modern art. 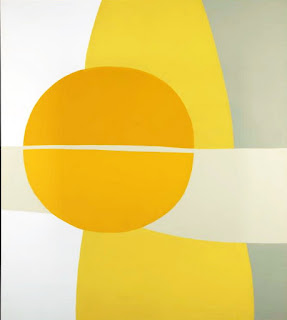 7
Yellow and Gray
Felrath Hines (1913-1993), American
Oil on linen, 48" x 54" (w x h), 1976
Smithsonian American Art Museum
Wiki notes:
Samuel Felrath Hines Jr. was an African American visual artist and art conservator. Hines served as a conservator at several institutions, including the Hirshhorn Museum and Sculpture Garden in Washington, D.C. and his paintings can be found in the collection of the Smithsonian American Art Museum. The artist's website is HERE. 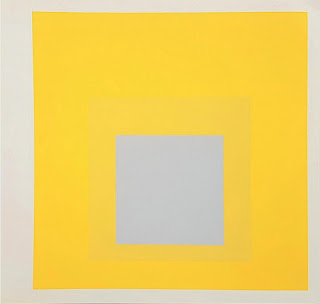 8
Homage to the Square
Josef Albers (1888-1976), German-American
Screen print in wove paper, 9" x 9", (w x h),
Edition of 1,500, 1977
$499, Available HERE
Artspace website:
An influential artist of the 20th century, Josef Albers was a painter, print-maker, photographer, and designer known for his crucial role in developing the Bauhaus, his innovations in Geometric Abstraction, and his explorations into the subjective experience of color. As Albers noted, "When you really understand that each color is changed by a changed environment, you eventually find that you have learned about life as well as about color."

Born in Germany, Albers was a student at the Bauhaus, an institution renowned for its impact on all aspects of modern design, and began working in stained and sandblasted glass, designing windows, furniture, household objects, and typography, as well as publishing poetry and art writing. In 1933 he moved to the United States with his wife, the artist Anni Albers, where he was professor at the noted avant-garde institution Black Mountain College. He has influenced many significant artists including Peter Halley, Donald Judd, and Robert Rauschenberg.

In 1950, Albers began what would be his most famous work, the Homage to the Square series, a body of more than a thousand paintings, drawings, prints, and tapestries, created over a period of twenty-five years. The series was based on a mathematically determined format of several squares, which appear overlapping or within one another.

In 1971, Albers was the first living artist ever to be honored with a solo retrospective at the Metropolitan Museum of Art.
Posted by Bruce McMillan at 11:46 PM