Wiki:
Of her life in art, Marie-Louise once remarked, "If you could only paint a single good picture in your lifetime, your life would be worthwhile."

Tate Museum Note:
This was painted in a small hotel in Amsterdam. The artist had traveled there with her mother from their home in Vienna, immediately following the arrival of the Germans in Austria in 1938. In this still life, she posed the objects, including two eighteenth-century Chinese sheep ornaments and some fruit, on an ironing board in the hotel, with the ironing board dictating the unusual oblong shape of the painting. Aside from the sheep, objects whose reassuring familiarity reminded the artist of her Viennese surroundings, this unusual still life is characterized by the rich colors of the grapefruit and by the bunch of grapes.

Read the moving and uplifting notes about her and flight from the Nazis HERE in the "Catalogue Entry" and on Wiki HERE.

Also, Susan Abbott of Vermont, who I took two workshops years ago with, has a posting, Great Art, Lousy Times, that you might find of interest HERE. 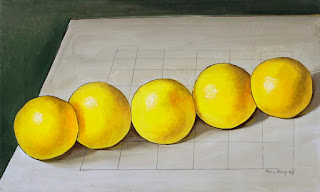 Wiki edited:
Man Ray's birth name was Emmanuel Radnitzky. He was born in South Philadelphia, Pennsylvania in1890. He was the eldest child of Russian Jewish immigrants Melach "Max" Radnitzky, a tailor, and Manya "Minnie" Radnitzky (nee Lourie or Luria). He had a brother, Sam, and two sisters, Dorothy "Dora" and Essie (or Elsie), the youngest born in 1897, shortly after they settled in the Williamsburg neighborhood of Brooklyn, New York. In early 1912, the Radnitzky family changed their surname to Ray. Man Ray's brother chose the surname in reaction to the ethnic discrimination and antisemitism prevalent at the time. Emmanuel, who was called "Manny" as a nickname, changed his first name to Man and gradually began to use Man Ray as his name.

After living in Paris since 1921, Man Ray was forced to return to the United States due to the Second World War. He lived in Los Angeles from 1940 to 1951 where he focused his creative energy on painting. A few days after arriving in Los Angeles, Man Ray met Juliet Browner, a first-generation American of Romanian-Jewish lineage. She was a trained dancer, who studied dance with Martha Graham, and an experienced artists' model. The two married in 1946 in a double wedding with their friends Max Ernst and Dorothea Tanning. In 1948, the Year he painted Five Grapefruits, Man Ray had a solo exhibition at the Copley Galleries in Beverly Hills, which brought together a wide array of work. In 2013 his 1916 canvas Promenade sold for $5,877,000 at the Sotheby's New York Impressionist and Modern Art Sale. 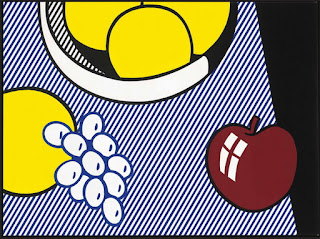 Christie's notes edited:
By the time Apples, Grapes, Grapefruit was painted, Lichtenstein had firmly established himself as one of the leading figures of the Pop Art movement. With its bold palette, impeccable geometries and finely-calibrated composition, Roy Lichtenstein's Apples, Grapes, Grapefruit stems from the important series of still life paintings that the artist produced between 1972 and 1974. His still life paintings departed from the distinctive cartoon imagery that had brought about his rise to fame during the 1960s. Acquired by Lord and Lady Jacobs directly after its creation, it was held in their collection until this auction.

Lichtenstein's still life objects are reduced to a set of basic circular geometries, the components of Apples, Grapes, Grapefruit, signified purely through shape and color. The reductive, highly stylized appearance was the result of his labor-intensive method. The composition began life as a small-scale drawing, reworked several times before it was projected onto canvas. Here, a second stage of drawing and redrafting took place, always deferring to the original sketch, with colored paper taped into place for reference. It was through this method that stripes replaced his Ben Day dots. They were incorporated into finished canvases from 1969 onward. Ben Day himself had often used lines in his shading system, and Lichtenstein reveled in their disorientating optical quality, claiming that the stripes had the power to alter our perception of color. 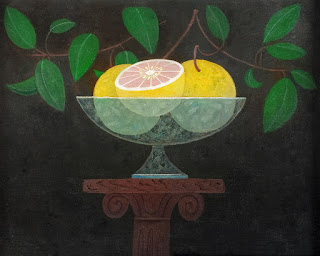 Simple Pleasures publisher's book info edited:
Lee was one of the most recognized artists in America during the 1930s and 40s. She was a leading figure in the Woodstock Artist's Colony. Her art reveals an ability to merge the reduction of abstraction with the appeal of the everyday. In so doing, she offers a coherent visual identity that successfully bridges the various artistic camps that formed with the shift in the art world in the post-World War II era.

In 1935 her painting Thanksgiving was awarded the Art Institute of Chicago's Logan Prize and instigated the Sanity in Art movement in protest. Two years later, her painting Catastrophe was purchased by the Metropolitan Museum of Art. Lee's commercial commissions for patrons such as American Tobacco Company, Life magazine, Abbott Laboratories, and Associated American Artists are compelling in both their populist accessibility and in their deceptively sophisticated abstraction.
Simple Pleasures presents Simple Pleasures: The Art of Doris Lee, September 2020, the first major assessment of works by Doris Lee is on amazon HERE. Her art from this book on exhibit at the Westmoreland Museum of American Art, Greensburg, Pennsylvania, September 26, 2021 - January 09, 2022 HERE. 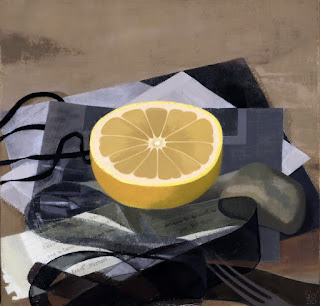 Antrese Wood note:
Susan Jane Walp paints still lifes from her home in Vermont. Her compositions expertly balance silent spaces with a powerful geometry that pulls you in and holds you. Her influences range from Piero de la Francesca to Lennart Anderson whom she met and studied with at a summer program run by Boston University during her undergrad years.

Susan Jane Walp:
"In the late 1960s ... to make up credits ... I went to a program at Tanglewood, (Massachusetts) run by Boston University. Miraculously, Lennart Anderson was teaching there. The students from BU were very serious, and only because the beginner class was full, I was placed in Lennart's advanced class. That summer completely changed everything. I saw that my life was going to be devoted to becoming a painter.

Lennart painted in class; he didn't talk much. But I understood that he was teaching an approach to seeing tonal relationships. It was a very sensual, felt response to the motif. It was about discovering the beauty of these relationships and the thrill of translating them into paint. At the time, he was recommending a Dover book by Charles Hawthorne, Hawthorne on Painting, 1960 (on amazon HERE), which we all read and reread."

Born in Allentown, Pennsylvania, she received her BA from Mount Holyoke College, followed by studies at the New York Studio School and Brooklyn College. The artist's website is HERE. 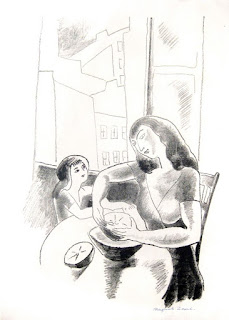 Bruce note:
If this is a self-portrait with her daughter, and this would be when her daughter was that age, 10-years old, it's of Marguerite and her daughter, Dahlov. I had the good fortune to cross paths with Dahlov Zorach Ipcar as authors. Dahlov was a fine artist and illustrated thirty children's books. The first time we met was in an elevator at a children's book conference at the University in Gorham, Maine. The last time we met was in Boothbay Harbor, where she signed a copy of The Little Fisherman, by Margaret Wise Brown (Goodnight Moon), and illustrated by her. It was a gift going to Iceland for the boy who was the star in my book set in Iceland, Going Fishing.

Wiki notes edited:
Marguerite Thompson Zorach was one of a small group of women admitted to Stanford University in 1908. Rather than completing her degree, she traveled to France at the invitation of her aunt, Harriet Adelaide Harris. Marguerite visited the Salon d'Automne the very day that she arrived in Paris. It was the intention of her aunt that Thompson attend the École des Beaux-Arts, but Marguerite was turned away as she had never drawn a nude from life. Marguerite had no interest in the formulas of academic painting. She chose to attend the post-impressionist school Académie de La Palette, where she was encouraged her to pursue her own interests, to paint in a style that was uniquely her own. She exhibited at the 1910 Société des Artistes Indépendants, and the 1911 Salon d'Automne, both renowned for their modernist themes.

While in Paris, she socialized with Pablo Picasso, ex-patriot Gertrude Stein, Henri Rousseau, and Henri Matisse through her Aunt Addie's connections. At school, the Académie de La Palette, she first met her future husband and artistic collaborator, William Zorach. William admired her passionate individuality, and he said of her modernist Fauvist artwork "I just couldn't understand why such a nice girl would paint such wild pictures."

Back in California in 1912 she gave birth to a son, Tessim Zorach, in 1915, and a daughter, Dahlov Zorach, in 1917, eventually, settling in Greenwich Village. In 1922 they visited Gaston Lachaise at Georgetown, Maine, and later bought a house. 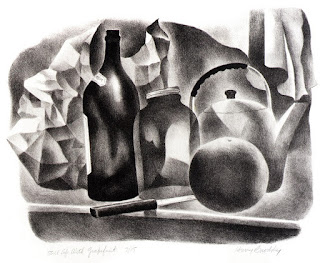 Terra Foundation edited:
Harry Brodsky, a painter, print maker, designer, and teacher, is best known for lithograph images of Philadelphia and the surrounding area made in the 1930s and 1940s. Brodsky made both color and monochrome lithographs of a variety of themes and in a wide range of styles reflecting current trends in American art in the middle decades of the twentieth century. Still lifes, landscapes, city scenes, and interiors showing ordinary Philadelphians comprise his subjects; he also created purely nonobjective compositions. A native of Newark, New Jersey, Brodsky graduated from the Philadelphia College of Art and also attended the University of Pennsylvania. 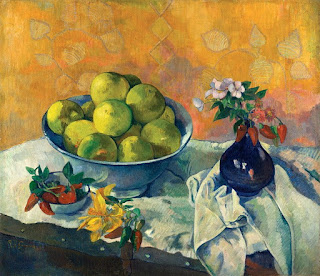 Foundation Notes edited:
It's believed that Gauguin painted Still Life with Grapefruits, which for many years was entitled Still life with Apples and Flowers, in 1901. Experts came to this conclusion based on the arrangement of objects on the leather trunk, bringing the composition close to other paintings in the same year, and on his confinement to the hospital and subsequently to his studio due to illness, when he had to paint without a model.

His main concern appears not just the arrangement of the objects but the layout of the colors and the creation of harmony. The classic elements of Western still life have been replaced by exotic flowers, peppers and grapefruits.

Posted by Bruce McMillan at 9:44 AM