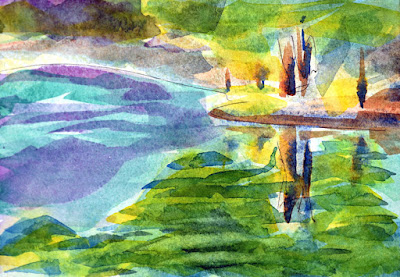 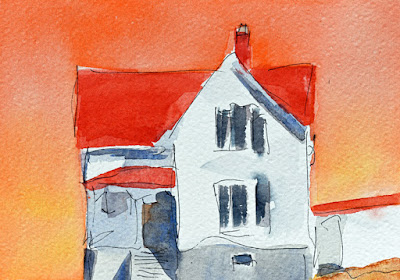 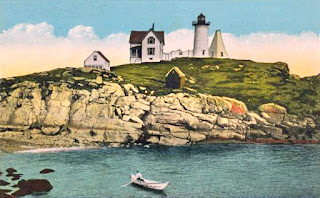 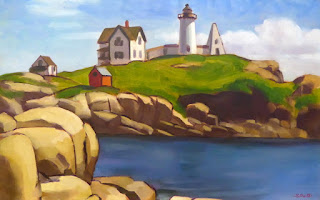 Henry Strater's portraits, watercolors and other realistic works are or have been displayed at the Philadelphia Museum of Art, the City Art Museum of St. Louis, the Detroit Institute of Arts and the Ogunquit (Maine) Museum of Art, a small museum he built in the art colony where he had spent his summers since 1925. A Strater portrait of Hemingway later was used for the cover of Carlos Baker's biography of the Nobel-winning writer.
Born in Louisville, Kentucky, Strater attended Princeton University, where he met F. Scott Fitzgerald whose disenchantment with the Ivy League genre became the basis for many of his novels. Henry Strater, a Lost Generation artist fished with, fought and eventually befriended Ernest Hemingway and illustrated the controversial Cantos of poet Ezra Pound.
He was the inspiration for the character Burne Halliday in F. Scott Fitzgerald's novel This Side of Paradise. "I was the model for Burne Halliday, I regret to say," Strater once said. "Why? Well, I was pretty much of a wild Indian."
Strater had gone to Paris in the 1920s to study at the Academy Grande Chaumiere and was with Edouard Vuillard when he met Hemingway. The two became friends, but only after they had brawled on a Paris street corner. "I had boxed in school, and I think I impressed Hemingway with my punch," Strater once recalled. "That's the only way you could impress him."
He founded the Ogunquit Museum of American Art. He was also a lady's man, and married three times. 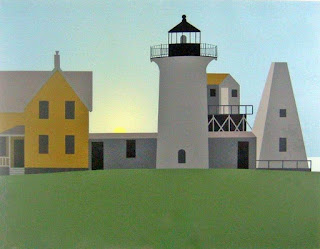 Arthur Seller, born in 1918, spent his teen years in foster homes in Massachusetts. He was trained at the Massachusetts College of Art where he received a degree in Graphic Design. He married and had a son and daughter. Accomplished in design and calligraphy, he worked in Boston before moving to New York City. He became one of the Head Art Supervisors at the advertising agency Young & Rubicam, which at that time was the second largest advertising agency worldwide. After ten years, he was offered his first four-week vacation. He took it. The day he returned to work, he called his wife and told her that he couldn't do it anymore after commuting by train many years from Westport, Connecticut.
He spent two years figuring out his next step. He taught himself color photography, got himself an agent, and traveled around the world taking photographs for major publications and corporate annual reports.
In 1968, at 50-years-old, they moved to Rockport, Massachusetts. There his wife went into real estate so that he could paint. For the next seven years he painted in oil, working in his studio overlooking the ocean.
At 57-years-old, while recovering from a hip replacement, he taught himself printmaking. His silkscreen prints were complex, some having up to 44 colors. He made them working solo in limited editions, some while he was on crutches. At his peak he had as many as thirty galleries up and down the east coast until he died in 1991 at the age of 72-years-old. 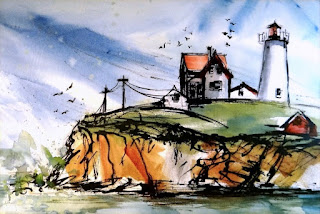 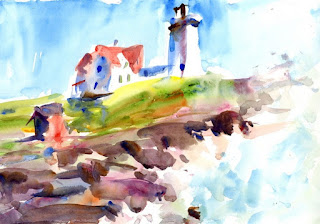 Gordon France graduated from The School of The Art Institute Of Chicago then began a forty year career from studio artist to ad agency creative director. Upon retiring he resumed watercolor painting after attending evening classes at the Art Institute. Since then he has had exhibits.
He was awarded 3rd place in American Artist magazines 70th Anniversary watercolor competition. Two of his paintings chronicling American city life were chosen for a two-year exhibit at the US Embassy in Sarajevo as part of the State Department's Art In Embassies program.
He regularly attends painting workshops in the US and Europe and teaches classes, workshops, conducts painting critiques and demonstrations throughout Chicago and the Midwest. He's a member of the Transparent Watercolor Society and the Illinois Watercolor Society. He is represented by Lucas Galleries in New York City. 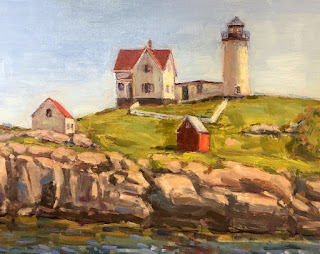 5
Nubble Light
Pam Lussier, American
Oil on linen, 10" x 8" (w x h)
$850 USD
Pamela Lussier is a 1978 graduate of the Art Institute of Boston. For twenty years she's been painting plein air, teaching workshops and participating in national paint outs.
In December of 2007, Pam was diagnosed with Multiple Myeloma, a blood cancer, which resulted in the loss of her kidney function. Though her cancer remained in total remission after treatment, she received dialysis treatment for six years while painting and teaching. In 2013 she received a new donor kidney.
Pam currently paints full time, teaches painting workshops with her husband David Lussier and helps manage the Todd Bonita Gallery in Perkins Cove, Ogunquit Maine during the summer season. 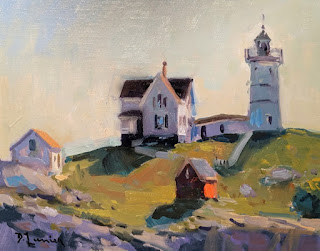 6
Bright Light
David Lussier, American
Oil on linen, 10" x 8" (w x h)
$950 USD
David Lussier is an award-winning contemporary impressionist and nationally recognized plein air painter and workshop instructor. David started his career as a commercially trained illustrator, but his passion was in fine art. Painting professionally for more than twenty-five years, he's garnered more than 75 prizes for his work, and is in numerous private and corporate collections. His work has been featured in art journals and he is a professional member in art associations and groups. David is also an official U.S. Open artist for the United States Golf Association. Four of his paintings hang in the permanent collection of the U.S.G.A. Museum in Far Hills New Jersey. He's married to painter, Pam Lussier. The Lussier's website is HERE

Posted by Bruce McMillan at 1:26 AM No comments: 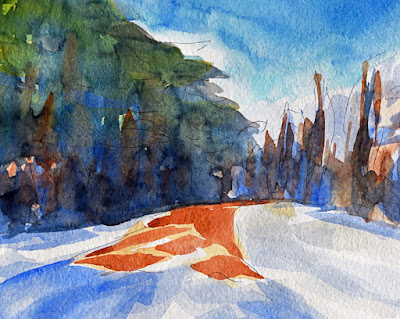 Posted by Bruce McMillan at 8:19 AM No comments:

Design in Icing Out 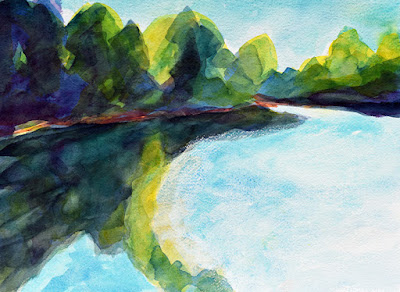 Design in Icing Out
at the first pond on the pond's walk
in the Town Park behind my home on
March 22, 2020, painted April 6, 2020
20" x 13" (w x h), Daniel Smith, Schmincke Horadam,
and Winsor & Newton watercolors, selected for light fastness
and permanence, wax resist, and #3 graphite on 140 lb.
Fabriano Artistico cold press rough 100%
cotton extra white watercolor paper
framed, $700
Posted by Bruce McMillan at 5:16 AM No comments:

Freyr at the Tub 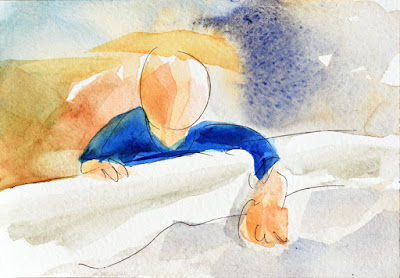 Posted by Bruce McMillan at 12:19 AM No comments:

Up the Road Home 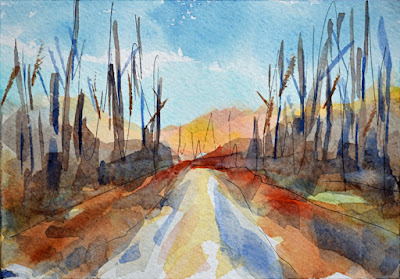 We challenge you to recreate a work of art with objects (and people) in your home. Choose your favorite artwork; find things lying around your house; recreate the artwork with those items.

See fabulous examples and get the directions on how to enter at the Getty HERE. 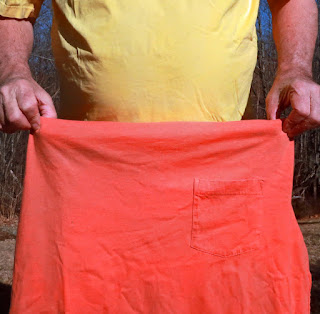 T off Rothko Study 1,
also known as Color in My Field Study 1 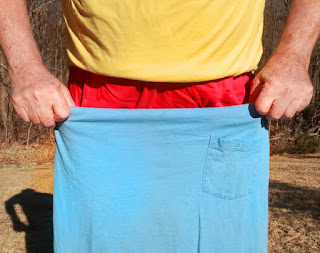 T off Rothko Study 2,
also known as Color in My Field Study 2

Posted by Bruce McMillan at 1:17 AM No comments: 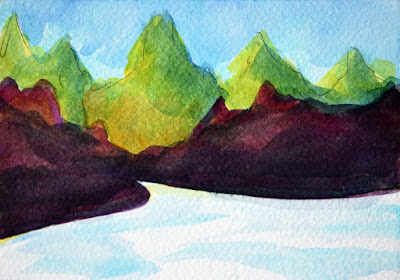