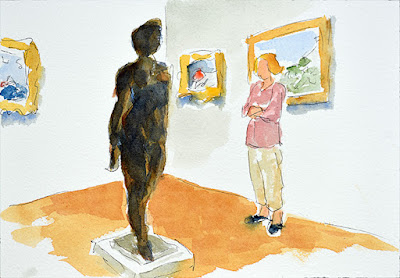 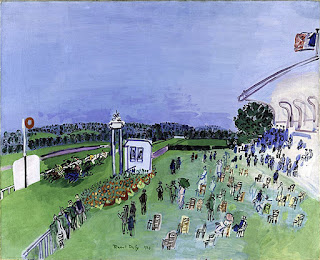 The painting behind the ponderer:
Race Track at Deauville, the Start
Raoul Dufy, French (1877-1953)
Oil on canvas, art dimensions 32" x 26" (w x h), 1929
Harvard Art Museums
The gallery text on the wall reads:
"Though he initially worked in an impressionist style, Dufy's practice as a designer and painter was characterized by the use of bright, flat colors. He developed this style after encountering the art of Henri Matisse and the Fauves at the Salon d'Automne in 1905, the newly inaugurated annual exhibition of modern art in Paris. Dufy often depicted horse races, regattas, and other upper-class amusements, and he produced more than thirteen paintings of the racetrack at Deauville, Normandy, including this one. Here he applies vibrant blues, greens, and purples in transparent washes that burst through the outlines meant to confine them, while the calligraphic lines that define the spectators and chairs on the lawn lend a sense of movement and spontaneity to the scene. The decorative qualities of this and other works by Dufy stem from his collaboration with the fashion designer Paul Poiret and the silk manufacturer Bianchini Férier between 1912 and 1928."
And... 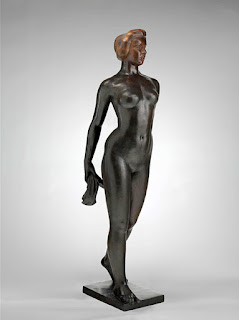 The observed bronze sculpture
Ile-de-France
Aristide Maillol, French (1861-1944)
Bronze, 65 15/16 x 17 1/2 x 22 13/16 inches, 1925
Harvard Art Museums
The gallery text on the wall reads:
"Like Renoir in the 1880s, Maillol studiously focused on the female form, reinterpreting the classical tradition of the nude bather in modern terms. He first explored this subject in his paintings, but turned to a more dramatic expression of the theme in his monumental sculptures of the early twentieth century. This bather, meant to be wading in shallow water, is the culmination of fifteen years of work, after which Maillol made only six bronze casts. The title identifies the work as an allegorical representation of the fertile region surrounding Paris, bound by the Seine and its tributaries. Maillol enjoyed considerable fame in the United States. Wertheim searched for this sculpture for some time before he finally acquired it in 1949."
Posted by Bruce McMillan at 4:34 PM