She Reads about Him... 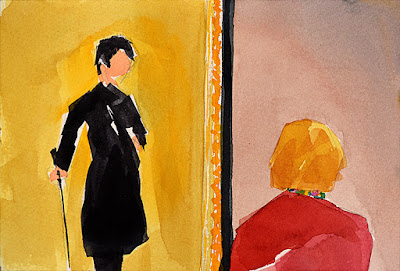 She Reads about Him
as He Studies Her
From a portrait painting of James Abbott McNeill Whistler
by William Merritt Chase at the MFA in Boston,
Whistler looks down at Ruth Kaldor, who is reading about
this Chase painting, at the MFA in Boston, Massachusetts
on December 8, 2016, sketched on December 10, 2016
7" x 5", Winsor & Newton and Holbein watercolors, and
#3 graphite on 140 lb. Fabriano Artistico cold press
fine grain 100% cotton extra white watercolor paper
framed, $100 + $5.50 sales tax + $9.50 shipping = $115.00

"William Merritt Chase, on his way to Spain in 1885 by way of London, decided to introduce himself to James McNeill Whistler (1834-1903), whose works he had long admired. Whistler urged him to stay longer so they could paint portraits of one another. In depicting Whistler, Chase captured Whistler's theatrical persona, a character that Whistler cultivated. Although Chase likely intended to honor his new friend, Whistler was not amused. He called Chase's painting a 'monstrous lampoon.' He broke off their friendship and apparently never finished his portrait of Chase. He complained about Chase for the rest of his life." Source: MFA Boston, TheMET, NY
Posted by Bruce McMillan at 9:20 PM